Posted by Νίκος Λαγκαδινός at 10:21 PM No comments:

Posted by Νίκος Λαγκαδινός at 10:18 PM No comments:

Posted by Νίκος Λαγκαδινός at 10:16 PM No comments:

Posted by Νίκος Λαγκαδινός at 10:14 PM No comments:

Posted by Νίκος Λαγκαδινός at 10:11 PM No comments:

Posted by Νίκος Λαγκαδινός at 9:32 PM No comments:

Posted by Νίκος Λαγκαδινός at 9:20 PM No comments:

Posted by Νίκος Λαγκαδινός at 9:17 PM No comments:

Posted by Νίκος Λαγκαδινός at 9:15 PM No comments:

Posted by Νίκος Λαγκαδινός at 9:12 PM No comments:

Posted by Νίκος Λαγκαδινός at 8:55 PM No comments:

“Percival's talent is multifaceted, sparked by a satiric brilliance that could place him alongside Wright and Ellison.” — Publisher's WeeklyPercival Everett is the author of fifteen novels, three collections of short fiction, and one volume of poetry. Among his novels are Wounded, Glyph, Erasure, American Desert, For Her Dark Skin, Zulus, The Weather and The Women Treat Me Fair, Cutting Lisa, Walk Me to the Distance, Suder, The One That Got Away, Watershed, God's Country, his short story collection is Big Picture, and his poetry book is re:f (gesture). He is the recipient of the Academy Award from the American Academy of Arts and Letters, the Hurston/Wright Legacy Award, the PEN/Oakland-Josephine Miles Award for Excellence in Literature (for his 1996 story collection Big Picture) and a New American Writing Award (for his 1990 novel Zulus). His stories have been included in the Pushcart Prize Anthology and Best American Short Stories. He has served as a judge for, among others, the 1997 National Book Award for fiction and the PEN/ Faulkner Award for Fiction in 1991. He teaches fiction writing, American Studies and critical theory and he has taught at Bennington College, The University of Wyoming and the University of California at Riverside. He is currently at the University of Southern California.With these novels and collections of stories to his credit, Everett has developed a reputation as a wordsmith. One critic describes him as a lyrical writer, whose “stark and sometimes powerful prose” leaves a lasting impression. His 1994 book God’s Country drew measured praise from the New York Times: “[The novel] starts sour, then abruptly turns into Cowpoke Absurdism, ending with an acute hallucination of blood, hate and magic. It’s worth the wait. The novel sears.”Born and raised in Columbia, S.C., Everett spent a childhood “filled with books,” he says. As an undergraduate at the University of Miami, majoring in philosophy and biochemistry, he discovered the writings of early 20th-century analytic philosopher Ludwig Wittgenstein. Wittgenstein held that most philosophical problems were semantic— misunderstandings caused by imprecise language. “I was seduced completely by Wittgenstein,” Everett says. “He still informs my way of thinking. The root for me is matters of language.”

He has worked as a musician, a ranch hand and a high school teacher. In addition to writing Everett is a painter, a woodworker and a flyfisherman. He trains mules on his ranch outside of Los Angeles...

Posted by Νίκος Λαγκαδινός at 2:50 AM No comments:

J. K. Rowling drew a line under Harry Potter with the seventh and final book last summer. But it seems the line is distinctly shaky: a year on, and she’s already crossed it, with a Potter prequel.

The one-off 800-word handwritten “storycard” hardly counts as a book, but that won’t stop bidders at Waterstone’s on June 10, when – with the assistance of Sotheby’s – it goes on auction for writers’ charity English PEN and Dyslexia Action. “There is just no telling how high the bidding will go,” Sotheby’s specialist Philip Errington said, and with good reason – one of seven handwritten copies of Rowling’s book of stories The Tales of Beedle the Bard netted 1.95 million for charity in 2007, the highest ever price achieved at auction for a modern literary manuscript.

The storycard finishes with the words “From the prequel I am not working on – but that was fun!” and is signed J. K. Rowling, 2008. It will be sold alongside 12 other storycards, written by A-list authors such as Margaret Atwood and Tom Stoppard. In August a printed postcard book featuring all 13 stories will go on sale, with profits going to English PEN and Dyslexia Action... [article continues]

Posted by Νίκος Λαγκαδινός at 11:04 PM No comments:

The literary giant Susan Sontag was determined to beat the cancer that claimed her. Now her son tells the story of her final struggle, and opens her private papers to reveal intimate secrets about her life

Susan Sontag burst upon the 1960s in a blaze of black hair, black eyes, passion and intellectual potency – the ultimate babe with brains. An exceptional essayist, she challenged accepted cultural wisdom and was particularly brilliant on how photography changes the way we think about the past and present. For her, cameras and celebrity held no fear, and her image was captured by the most avant-garde and distinguished photographers. Before their lenses she is beautiful, haunting: sculpted face, strong body.

Yet two years ago, shocking photographs of Sontag were published, taken by one of the great loves of her life, the celebrity portraitist Annie Leibovitz. In an autobiographical tome, Leibovitz caught in explicit detail the painful last journey that ended in Sontag’s death in December 2004. Here she is unrecognisable, hair shorn, in the final, ugly, bloated stages of a fatal blood cancer; there, dressed for the grave, in grotesque finery. 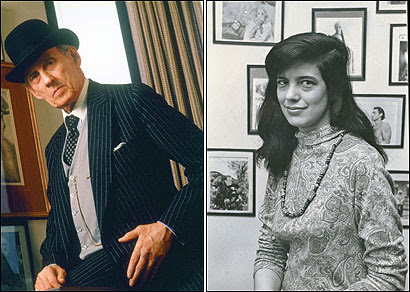 This is a story about a woman who lived an epic life and who, in death, still holds power over those who loved her. Long before Sontag became an academic amazon, before others adopted her as an icon, she had been a frightened, asthmatic little girl, abandoned by her alcoholic mother and pregnant at 19. Fleeing the older husband she married within days of meeting him – the sociologist Philip Rieff – she made her way to New York to begin her writing career and bring up their son alone. He, somehow, often gets written out of the details of her life. His name is David Rieff and he has written a book about her painful death. In it he attempts to be truthful about living with the dying Sontag, about universal life-and-death dilemmas. Yet the reader is left wondering why he wrote it; puzzling over what those who loved Sontag believed was right to publish about her private pain. Could capturing her in death have become a way for both her son and her lover to possess her, finally, in a way that wasn’t possible in life?

Rieff agrees to talk in Rome. His mother brought him here when he was a teenager, and he can’t escape thoughts of her: she would, he says, have loved the wine bar he discovered last night; he knows she would have crammed every day here to bursting point... [article continues]

Posted by Νίκος Λαγκαδινός at 10:53 PM No comments:

Ismail Kadare: Once upon a time... under Enver Hoxha's brutal communist regime in Albania!

Ismail Kadare wrote for decades under Enver Hoxha's brutal communist regime in Albania, was suspected of spying and threatened with punishment for subversive writing. Despite all this, at 72 he is serene.

Sitting on a cream sofa in his lovely Paris flat, his architectural face and booming, accented French give him his authoritative air. But his confidence is also born of widespread recognition. A winner of the International Man Booker Prize, he is adored in Albania and read across Europe, particularly in France. Now, at last, his work is seeping into the Anglophone consciousness.
Last year, the collection Agamemnon's Daughter was published. The title story took the Greek theme of sacrifice and gave it chilling resonance within a totalitarian regime. Now The Siege, a novel, is published in English, thanks in part to the tireless work of the translator David Bellos.
Written in 1970, it tells of a fictional siege against an Albanian fortress by the Ottoman Army. One - patriotic - interpretation is that Albania is as impregnable as the fortress in the story, but another (given that the Turks did eventually conquer Albania) is that it is only a matter of time before greater forces overpower a smaller one. What is striking, though, are the nuances of the way the Ottoman general controls the army - he sends subversive elements to dig a tunnel, much as Hoxha sent dissidents to mine chromium. And the book seemed a rallying cry to people besieged by the forces of tyranny; even as they are brutalised by the siege, they are hardened against it.
But Kadare disagrees strongly with the idea of the book as a directly dissident work. “This is an almost entirely innocent book in that respect,” he says. “It doesn't claim to or aim to criticise the regime itself.” But despite this, he says, it is subversive in another way: “If you write real literature...normal, authentic literature, then you have already done something that by the fact of being there is against the totalitarian regime.
“Because all totalitarian regimes, especially Stalinist ones, aren't normal, they're mad,” he adds. “So if you manage to do something normal, then you are already against the regime just by the fact of doing it. For me, great literature is just genetically, by its very nature, against totalitarianism. If a book is well done, not to say great or anything - but is a good, proper genuine book, then it is automatically against the totalitarian regime.”
The idea of artistic expression as freedom in itself was obviously tremendously important to Kadare when he wrote the book. “I wrote it in the depths of the totalitarian night,” he says. “And I was very happy when I published it, because it had absolutely nothing to do with the Communist slogans of the day or all the ideological baggage that is part of the culture of Stalinist societies. To be able to write free things in circumstances that are not free is really wonderful.”
He tells me how, in 1981, the son of the Prime Minister, a friend, came to him to tell him that the Government suspected him of spying and that he must be careful. But Kadare's response was to try to forget this, to ignore the authorities and their view of him. Because, he says: “In a country of that kind, the first thing for a writer is the most important one, the most substantial one, it is: do not take the regime seriously.
“You are a writer, you are going to have a much richer life than they have, you are in some sense or another eternal by comparison with those kinds of people, and in the last analysis you don't need to bother about them very much.”
He laughs. “Easy to say,” he says, “but when you're actually there, it's not so easy to do.” He draws a parallel with Dante in the Inferno, when a tempest comes into sight. Virgil, his guide to the underworld, assures him that he need not worry because it is a dead tempest and cannot harm him. “If the writer convinces himself that the tempest is dead,” Kadare says, “the writer is saved.”...

Posted by Νίκος Λαγκαδινός at 10:40 PM No comments:

Posted by Νίκος Λαγκαδινός at 9:30 PM No comments:

Posted by Νίκος Λαγκαδινός at 9:26 PM No comments:

Posted by Νίκος Λαγκαδινός at 9:20 PM No comments: