Colombian writer Gabriel Garcia Marquez, the Nobel Prize-winning magic realist behind the beloved novels One Hundred Years of Solitude and Love in the Time of Cholera, has died at the age of 87, according to sources close to the family. The beloved Spanish-language writer died at home in Mexico City around midday, sources told The Associated Press, confirming Mexican newspaper reports Thursday afternoon. The individuals spoke on condition of anonymity out of respect for the family's privacy.
Garcia Marquez won the Nobel Prize for Literature in 1982, with organizers hailing "his novels and short stories, in which the fantastic and the realistic are combined in a richly composed world of imagination, reflecting a continent's life and conflicts."
Considered one of the most popular Spanish-language writers of his generation, Garcia Marquez was born in the Colombian mountain town of Aracataca, which inspired the fictional village of Macondo immortalized in his generations-spanning family saga One Hundred Years of Solitude.
However, the media-shy writer endearingly dubbed "Gabo," had lived in Mexico City for more than 30 years. 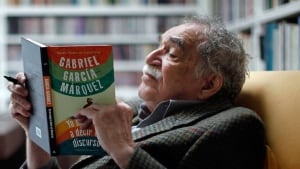 Nobel laureate Gabriel Garcia Marquez was best known for his magic realism novels and short stories, including his epic and bestselling One Hundred Years of Solitude. (Canadian Press)

A former film critic, journalist and foreign correspondent, Garcia Marquez eventually began writing fiction. He published the epic One Hundred Years of Solitude in 1967. Translated into more than 30 languages, it has sold more than 30 million copies around the globe.
His other works — including Autumn of the Patriarch, Love in the Time of Cholera, Chronicle of a Death Foretold, The General and His Labyrinth, Memories of My Melancholy Whores, Living to Tell the Tale and I Didn't Come Here to Make a Speech — spanned novels, novellas, short stories, a collection of speeches, essays, screenplays and a memoir.
Several of his works have also been adapted for other media, including the 2007 movie Love in the Time of Cholera and an opera based on Of Love and Other Demons.
Condolences poured in swiftly from around the world as news of his death spread.
Colombia’s President Juan Manuel Santos called Garcia Marquez “the greatest Colombian of all time.”
Enrique Santos Calderon, the president’s brother and close friend of Garcia Marquez, said his writing “put Colombia on the map and changed the image of Colombia.”

“From the time I read One Hundred Years of Solitude more than 40 years ago, I was always amazed by his unique gifts of imagination, clarity of thought, and emotional honesty ... I was honoured to be his friend and to know his great heart and brilliant mind for more than 20 years," said former U.S. president Bill Clinton.
"He is like the Mandela of literature because of the impact that he has had on readers all over the world,” said Cristobal Pera, editorial director of Penguin Random House in Mexico.
"His influence is universal, and that is a very rare thing."
In 2012, the author's younger brother, Jaime Garcia Marquez, said the celebrated author had been suffering dementia for some time and that the symptoms had accelerated since chemotherapy treatment for lymphatic cancer in Los Angeles in 1999.
However, Jaime Abello, director of the Gabriel Garcia Marquez New Journalism Foundation in Cartagena, disagreed. At the time, he said Marquez's condition was open to interpretation and that he was simply showing "the normal signs of his age."
Earlier this month, Garcia Marquezwas hospitalized in Mexico City for dehydration and a lung and urinary infection, Mexico's health ministry said, adding at the time that he had responded well to treatment. He was released from hosptial last week.
His survivors include his wife, Mercedes Barcha, and sons Rodrigo and Gonzalo.

Posted by Νίκος Λαγκαδινός at 3:32 AM