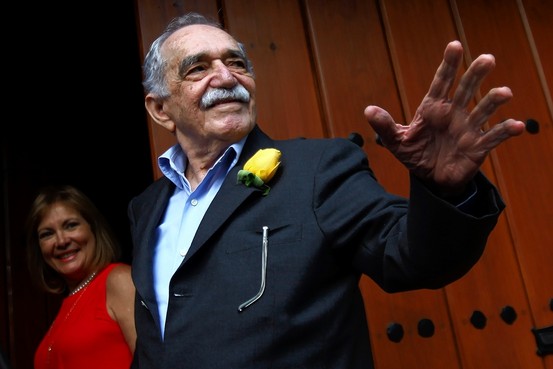 Mr. García Márquez greets well-wishers on his 87th birthday outside his home in Mexico City last month. The Colombian author died on Thursday. Reuters
BOGOTÁ, Colombia—The Nobel Prize-winning author Gabriel García Márquez popularized magical realism in Latin American literature by writing fantastical novels that drew on the folk tales and ghost stories he had heard as a child on Colombia's poor, sun-baked Caribbean coast.
Mr. García Márquez, who died in his Mexico City home at age 87 on Thursday after being hospitalized for infections, was best known for his 1967 masterpiece, "One Hundred Years of Solitude," which recounted the travails of the abundant and obsessive Buendía clan.
Translated into dozens of languages and selling 30 million copies, the book is considered literature's exemplar of magical realism, generating countless imitations and inspiring a generation of writers in Latin America and beyond.
Though Mr. García Márquez didn't invent the technique, he became the leading exponent of the style, which balances dreamlike, fantastical vignettes with sharply focused realism, all of it solemnly delivered through an eccentric cast of whimsical characters.
Readers of his books have delighted in stories populated with tin-pot dictators, cows that invade a palace, women that levitate, self-obsessed characters that don't age and brokenhearted suitors.

The news triggered an outpouring of grief from Colombians, who venerate Mr. García Márquez and see his literature as reflecting the soul of their country. Colombian President Juan Manuel Santos tweeted: "One-thousand years of solitude and sadness for the death of the greatest Colombian of all time!"
In a career spanning more than 60 years, Mr. García Márquez wrote some of the Spanish language's most revered books, many of which became best sellers in the U.S.
They included "Autumn of the Patriarch," about a Caribbean tyrant; "Chronicle of a Death Foretold," which painstakingly narrates a small-town murder; "Love in the Time of Cholera," about two lovers who wait half a century to reunite, and "The General in his Labyrinth," detailing independence hero Simón Bolívar's inglorious last days.
Mr. García Márquez was also an accomplished journalist, whose lyrical, deeply reported stories first caught the eye of readers in Colombia's chilly mountain capital, Bogotá, in the early 1950s.
He later became renowned not only for his profiles of presidents and despots but for the real-life close ties he cultivated with leaders ranging from Fidel Castro to Bill Clinton to François Mitterrand.

Mr. García Márquez found a certain thrill in hobnobbing with the powerful, noted his friends. "I still can't get used to the idea that my friends become presidents, nor have I yet overcome my susceptibility to being impressed by government palaces," he once wrote in an article, as recounted in Gerald Martin's 2009 biography, "Gabriel García Márquez: A Life."
Proudly leftist and anti-imperialist, he used his fame to try to lobby for Latin American unity and an end to U.S. meddling in the region.
Mr. García Márquez's friendship with Mr. Castro, though, caused him trouble. Other Latin American writers, among them the Cuban exile Guillermo Cabrera Infante, criticized him for cultivating warm ties with a dictator.
"Castro's courtesan," the Peruvian author, Mario Vargas Llosa, took to calling Mr. García Márquez.
View Slideshow 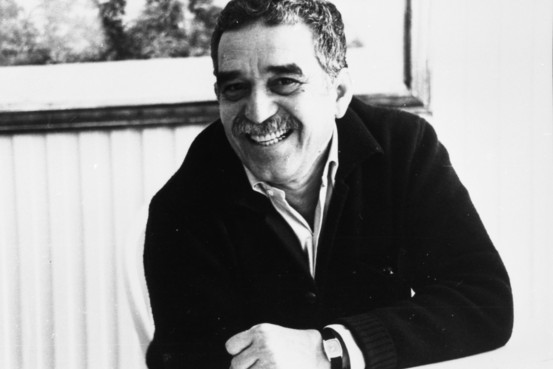 Mr. García Márquez said he was able to use his direct line to Mr. Castro to win the release of jailed dissidents.
"I know how far I can go with Fidel," the author told the New Yorker. "Sometimes he says no. Sometimes later he comes and tells me I was right."
Mr. Vargas Llosa famously ended his once-close friendship with Mr. García Márquez when he punched him in a Mexico City theater in 1976 after accusing him of betrayal, wrote Mr. Martin's biography.
Mr. García Márquez also had strained relations with the U.S., with his close ties to Cuba and sharp criticism of American policies leading the State Department to deny him a visa for years.
Mr. García Márquez had humble beginnings, born in the sleepy town of Aracataca on March 6, 1927 and raised for much of his early years by his maternal grandparents—Tranquilian Iguarán Cotes and Col. Nicolás Márquez —and two aunts.
The superstitions and otherworldly tales he heard in their small, wood-plank home would fire his imagination, especially those from the colonel. A veteran of the War of a Thousand Days—a Colombian civil conflict—Col. Márquez told his precocious grandson about the country's harrowing history, like the mass killing of United Fruit Co. banana workers.
"The great old man didn't tell me about Little Red Riding Hood," Mr. García Márquez said years later. "He told me terrible stories about war, about the massacre of the banana workers that took place the year I was born."
The colonel's stories of massacres, feuds and duels, the solitude of Aracataca and even his introduction to ice all found their way into García Márquez's books. The colonel himself is a recognizable figure in the author's fiction, notably as Colonel Aureliano Buendía in "One Hundred Years of Solitude."
Writing about his grandfather's death in his 2002 autobiography, "Living to Tell the Tale," Mr. García Márquez said that "a piece of me had died with him."
"But I also believe," Mr. García Márquez wrote, "without the slightest doubt, that in that moment [when he died] I was already a beginning writer who only needed to learn to write." 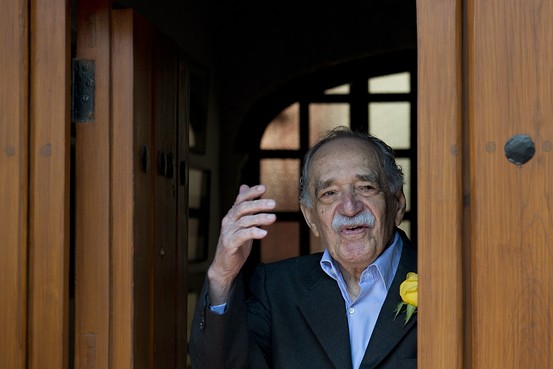 Gabriel Garcia Marquez waves while coming out from his house on his 87th birthday March 6 in Mexico City. Agence France-Presse/Getty Images


When he did learn, Aracataca, with its infernal heat and almond trees, was transformed into the magical town of Macondo in "One Hundred Years of Solitude."
The novel's historic sweep and timeless writing helped Mr. García Márquez win the Nobel Prize in Literature in 1982. Though Mr. García Márquez has said "Autumn of the Patriarch" was his best book and readers gravitated to "Love in the Time of Cholera," it was "One Hundred Years of Solitude" that first cemented his fame.
Some critics in Latin America said it was the most important book in the Spanish language since Don Quixote, and the American author and critic William Kennedy called the novel "the first piece of literature since the Book of Genesis that should be required reading for the entire human race."
Mr. García Márquez was self-deprecating about the book in some interviews, saying that he didn't understand why it was so celebrated. But in reality, the book's story arc percolated in his head for years, as they did for many of his books.
"I know the last sentence of the book before I sit down to write it," the author explained. "When I sit down I have the book in my head, as if I'd read it, because I've been thinking about it for years."
—Sara Schaefer Muñoz contributed to this article.
Posted by Νίκος Λαγκαδινός at 3:41 AM